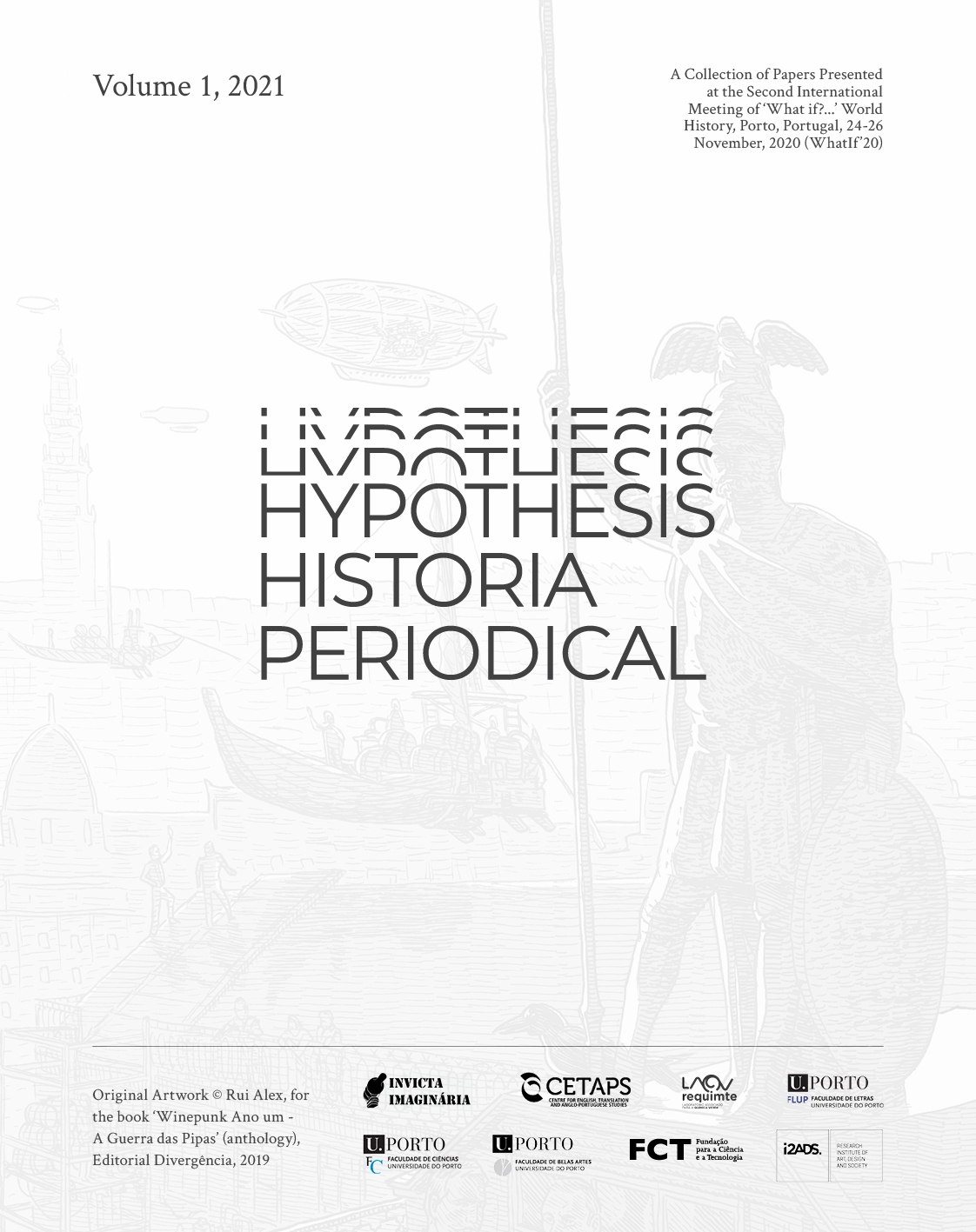 Section 1 Articles (including Reviews)
What if at the Monty Python Flying Circus had been preferred the use of the ‘long take’ technique? Exploring alternative history as a research tool for Scriptwriting and Television.
André Leite Coelho, Sol Alonso Romero

Gaming with History: How History of Science can be used as a scientific storytelling tool
Dora Dias, José Ferraz-Caetano

Modeling the Past: Using History of Science to Predict Alternative Scenarios on Science-based Legislation
José Ferraz-Caetano

The Anesthesiologist amidst a Pandemic: Storying an Alternate History provides Insights to improve the Practice of Anesthesiology in a VUCA World
Maria Minerva P. Calimag

What if we can be heroes for more than one day? The improbable possibility of an independent artistic career in Portugal
Ondina Pires, Ana Oliveira

Section 2 Round Table Chair Perspectives
What if… the History told the resistance? The unlikely odds of the Do-It-Yourself attitude – insights regarding Zines and artistic heroes from the Oral Presentation Round Table 4 chair
Susana Januário

What if different parallel realities converged? Insights regarding Edutainment, History of Science, and the value of Alternative Stories in Scenario Planning presented during the 2nd International Meeting of ‘What if?… World History
André Leite Coelho 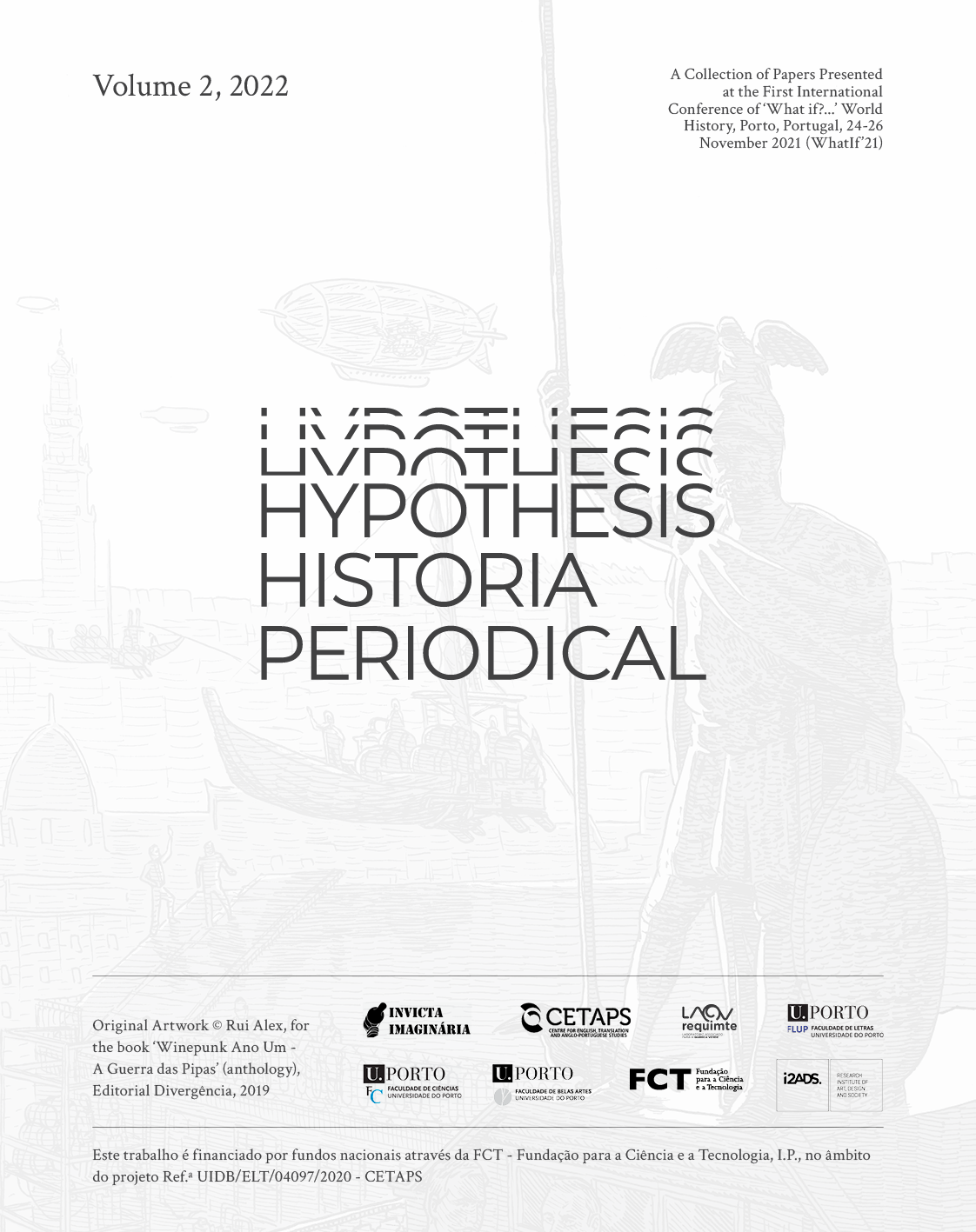 For King and Country, and Lenin: alternate history fiction in the Portuguese First Republic
Sérgio Neto

What if… heritage, businesses and cities were seen through alternative histories? Some reflections from the Round Table #3 chair
Sofia Sousa

What if Maria Graham did not travel to Brazil in 1821? Female travel artbooks and alternative history hypotheses, a case study
Maria de Fátima Lambert

What if relevant data concerning historic Brazilian heritage would not be accessible for those who do not master English language? A case study through the life-case of Maria Graham
Maria de Fátima Lambert

Hypothesis Historia Periodical is a double-blind peer-review international journal in the field of Alternative and Alternate History (AH), cross-referencing the theme with all areas of knowledge and expertise, from Fine Arts to Natural Sciences, from Literature to Economy. It is published in English as part of the Casa Comum of the Rectorate of the University of Porto, Portugal, and has an ISSN number.

Founded by the members of Invicta Imaginaria, the informal creative collective for the Winepunk Universe and CETAPS – Centre for English, translation and Anglo-Portuguese Studies, in a partnership among Casa Comum, Invicta Imaginaria and several research centers, the journal aims at providing a space for the publication of original, significant and innovative studies in Alternate and Alternative History, with special focus on those intersecting other fields, such as Experimental Sciences, Fine Arts, or Economy.

Hypothesis Historia Periodical is a pluralist publication with no ideological affiliation and open to proposals and perspectives from all research methodologies.

Submissions on all aspects of research regarding this objective are welcomed. The contributions should be submitted to the Editorial Board of the journal for double-blind peer-reviewing. It is understood that articles are original and are not being submitted to other journals at the same time. Contributions are assumed to be unpaid. The Editorial Board may also invite distinguished scholars to contribute to the journal.

It should be noted that inclusion of HA context per se in not sufficient to guarantee that a work is adequate to the journal. To be published, the work must present extra value to the understanding of the past, the perception of the present and/or the sustained prediction/evaluation of future issues and contexts. It should also have potential to shape the field and attract the interest of a wider audience of researchers and general public alike.

Occasionally the Editors may decide to publish something outside the defined scope of the journal if the work would be of interest to the AH community and/or have the potential to shape the field.

Coverage includes the following, but is not limited to:

The Hypothesis Historia Periodical: Conference Series is also associated with the International Meeting of ‘What if?…’ World History and the Hypothesis Cultural Week, a partnership between Invicta Imaginaria and Casa Comum, of the Rectorate of the University of Porto, Portugal.

This is an open-access publication under the CC-BY license.

Porto
Casa Comum, Rectorate of the University of Porto.

According to the international academic and scientific good practices of the finest publications, Hypothesis Historia Periodical has the following type of double-blind peer-reviewed contributions: Articles (including Reviews), Invited Lecturers f2f Insights, and Round Table Chair Perspectives.

It should be noted the following regarding two specific types of contributions:

Winepunk is a science fiction subgenre in the area of Alternate and Alternative History, developed by Invicta Imaginaria, and associated with the Hypothesis Historia Periodical.

The foundations for the Winepunk subgenre, rooted in Northern Portugal traditions and culture, depart from the episode of civil war that opposed Porto and Lisboa in 1919 and lasted only three weeks. Constructing an alternate chronology for the History of Portugal (and the World) where those weeks expand to three years, and adding a spicy flavor of science fiction element by providing the means for the Northeners to access biofuel through Port wine, a new fictional alternate universe is developed. The Winepunk Universe, fueled by wine.

December, 19 — Creation of the Special Section of Cheka, the external branch of the Russian bolsheviks secret services. The Deuxiéme Bureau de l’Etat-major General, the French external military intelligence agency, had been created in 1871, the British counterpart, the MI6, existed since 1914, and the American cryptography service (MI8) since 1917. The Polícia Preventiva, of the Portuguese Republic, was created around the end of the year 1917.

January, 18 — Beginning of the Versailles Treaty in Paris.

January, 19 — Implantation of the Monarchy of the North in Porto.

January, 27 — The monarchic troops are stopped at the Battle das Barreiras (Águeda), but (historical divergence) a quick intervention from a monarchic column from Guarda/Covilhã, commanded by Francisco Rolão Preto (historical figure), comprising the soldiers that escaped Lisbon (fictional) through a forced march across Serra da Estrela, destroys the republican aspiration to victory. This action would become known as “The March of the Elephants”.

February, 4 — Along the line Aveiro – Albergaria -Viseu – Covilhã, fortifications and trenches are built on both sides, as the enemies reassemble and review tactics.

February, 16 — King Dom Manuel II (historical figure) still condemns the insurrection until Paiva Couceiro (historical figure), the efective ruler of the Monarchy of the North states: “We will have a king, even that he shall be another king.” This message is trusted to the first agent of the new monarchic intelligence service, The Department (fiction) which escapes the republican naval blockade.

February, 18 — The Russian scientist Ilya llyich Mechnikov (historical figure, deceased in 1916, kept alive for this alternate universe), a guest at the Pasteur Institute of Porto since the beginning of the year (fiction), offers his help to the Monarchy of the North. Taking in account his experience in warfare in the Pasteur Institute of Paris during World War I (historical fact), the offer is accepted.

February, 25 — The King arrives at Coruna, benefiting from Galician monarchic contacts. The Department’s plan is to make the king’s arrival as noticeable as possible. As the entourage moves towards the new realm, news of the arrival spread quickly.

February, 27 — The atitude of Spanish troops, sent to stop the monarch, causes a nationalistic fury in the Galicians, resulting in a bloodbath in Santiago de Compostela.

March, 1 — When the king arrives at Vigo, the Galiza already declared its union to the Monarchy of the North. March, 8 — Triumphal arrival of Dom Manuel II. The Department deploys two attempts on the monarch’s life from its republican counterpart, The Prevention Police (historical organization).

March, 11 — Spain officially declares war on the Monarchy of the North.

March, 12 — Mechnikov presents his hidden ace: production of biofuel from the Port wine, based on a new yeast species, the Saccharomyces monarchic (fictional), and belic vehicles, true heirs to World War I tanks, the Mechas (fictional).

May, 1 — The Winepunk Civil War is reaching new peaks.

June, 12 — The high number of casualties inflicted to the Republican Army forces Lisbon to engage on tactics to prevent the South from joining the Monarchy of the North.

June, 23 — Spanish attempt to conquer Braganza (Batalha do Bottelon – Battle of Bottelon), defeated by the joined forces of Portuguese armies and Galician militias.

September, 11 — Begins the Rebelion of Catalunha, after confrontations in front of the monument of Rafael Casanova (historical figure) in Barcelona. Foreign press designates the war in the Iberian Peninsula as the Iberian Cauldron.

October — The Rebelion of Catalunha degenerates in a guerrilla movement, as a large scale action seems impossible. Meanwhile, in the frontier mountains of the Galicia, a second line of trenches is build to support the Monarchy of the North.

November, 9 — Spanish officers are unable to stop the defeats, one after another, and a coup d’etat lead by General Primo de Rivera and sanctioned by King Afonso XIII, establishes a dictatorship (historical fact but only two years later).

January, 7 — Pressured in three fronts (Galiza, Catalunha and Morocco), the Spanish dictatorship hires the German Hugo Stoltzenberg,  specialist in chemical weapons (historical fact but only one year later) and collaborates with the Portuguese republicans.

January, 19 — Celebrations of the first year of the Monarchy, shadowed by rumors of Spanish invasions in the coast. First parade of Mecha prototypes.

January, 28 — Foundation of the Spanish Foreign Legion in Morocco (Tercio de Extranjeros), to fight the Berberes. February, 11 — The actress Gaby Deslys, former love of King Manuel II, dies in Paris and the monarch, that widowed in 1919, embarks on a journey to the USA, to fight depression and gain financial support. February, 15 — Two Spanish naval fleets are beaten by the new Royal Naval Aeronautics, designed by Portuguese engineers (Batalha dos Carapaus – Battle of the Mackerels), stopping the invasion.

February, 17 — Following the amazing victories, the King arrives in the USA in glory and the American press takes his side, especially due to the animosity from the Hispano-American War of 1889.

April, 21 — Royal wedding between the King and Mary Pickford.

July, 14 — Thomas Townsend Brown starts to develop his concept of Bliefeld-Brown effect (historical but only one year after) for the Monarchy.

October, 19 — The Republic is taken by radicals, which promise to end the Civil War.

November, 10 — England finally decides to help the Monarchy and invades the Spanish-controlled part of Galiza, establishsing a new British government there. Secretly, the Order of Saint George, a Monarchic secret society related to the Department, tries to stop the King from accepting this help.

August, 29 — After the Spanish surrender in Mellila (historical fact), Spain sends the Legion to fight the